The situation of comparing two diagrams is common. For example, compare an ERD of conceptual model with an ERD of physical model and comparing a domain class diagram with a class diagram ready for implementation. Visual Paradigm allows you to compare the differences between diagrams in order to trace the changes between them.

With the feature of Visual Diff, two diagrams can be compared to recognize their differences. Changes, such as modification of properties (e.g. name) and addition/removal of containing models can thus be found easily. 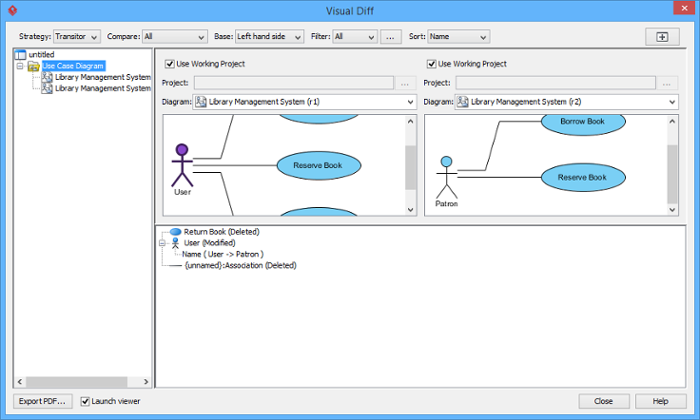 A comparison strategy determines how two diagrams will be compared. Each strategy is used for its own specific purpose. You can select the appropriate strategy that suits your case most. The following is the description of strategies:

Comparing view only, model element only, or both

Comparing from the left to the right and vice versa

Sorting the data on result pane

The selected option from the drop-down menu of Sort determines the order of data on the result pane. You can select sort by type, by name or by change type.

Exporting a document of differences

A document of the current comparing diagrams can be saved in your computer as PDF. Click Export PDF… button at the bottom left corner of the window. Select a directory for storing in Export PDF dialog box and then click Save button.