Visual Paradigm supports Object Relational Mapping (ORM) which maps object models to entity relational models and vice versa. Visual Paradigm helps mapping between Java objects to relational database. It not only preserves the data, but also the state, foreign/primary key mapping, difference in data type and business logic. Thus, you are not required to handle those tedious tasks during software development.

Generally speaking, the mapping between class and entity is a one-to-one mapping, meaning that one class in object model maps with one entity in data model. Classes that map with entities are represented by the stereotype <<ORM Persistable>>.

In the above example, the Customer class is the object equivalent of the Customer entity. This means that in application development or in runtime, an instance of Customer (class) stores the information of a customer retrieved from the Customer table of database.

Persistent attribute types are automatically mapped to appropriate column data types of the database you desired. The following table lists out the typical mapping between object model and data model. Note that the actual data type to map to depends on the default database you selected in database configuration.

You can map an attribute to a primary key column. When you synchronize the ORM-Persistable Class to the ERD, you will be prompted by a window to select primary key. 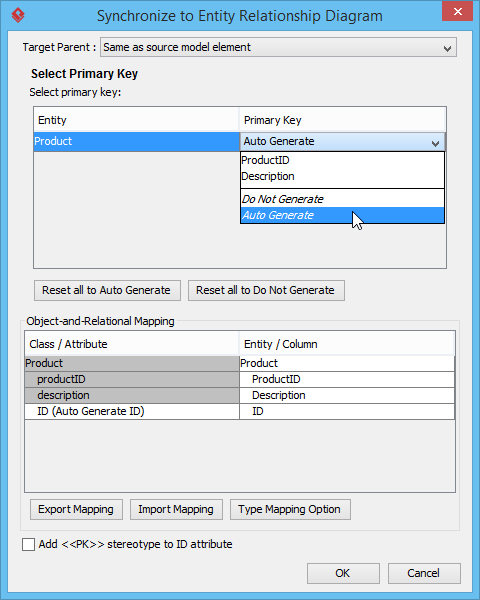 You can select an existing attribute as primary key, let us generate one for you. or select Do Not Generate to leave the generated entity without primary key.

Aggregation is a stronger form of association. It represents the “has-a” or “part-of” relationship.

In the above example, it shows that a company consists of one or more department while a department is a part of the company.

Note: You have to give the role names, “ConsistsOf” and “is Part Of” to the classes, Company and Department in the association respectively in order to proceed to the generation of code.

Composition implies exclusive ownership of the “part-of” classes by the “whole” class. It means that parts may be created after a composite is created, meanwhile such parts will be explicitly removed before the destruction of the composite.

In the above example, Visual Paradigm performs the Primary/Foreign Key Column Mapping automatically. ID of the Student entity is added to the entity, EmergencyContact as primary and foreign key column.

Multiplicity refers to the number of objects associated with a given object. There are six types of multiplicity commonly found in the association. The following table shows the syntax to express Multiplicity.

In the above example, it shows that a parent directory (role: parent) contains zero or more subdirectories (role: children).

For a many-to-many association between two classes, Visual Paradigm will generate a Link Entity to form two one-to-many relationships in-between two generated entities. The primary keys of the two entities will migrate to the link entity as the primary/foreign keys.

In the above example, Visual Paradigm generates the link entity, Student_Course between entities of Student and Course when transforming the many-to-many association.

Generalization distributes the commonalities from the superclass among a group of similar subclasses. The subclass inherits all the superclass’s attributes and it may contain specific attributes.

We provide multiple strategies for transforming the generalization hierarchy to relational model. Click here to learn more about the various inheritance strategies.

For a persistent class acting as persistent data storage, it may consist of a persistent data containing a collection of objects. Visual Paradigm promotes the use of Array Table to allow users retrieve objects in the form of primitive array.

When Visual Paradigm transforms a class with an attribute of array type modifier, this attribute will be converted to an Array Table automatically. The generated entity and the array table form a one-to-many relationship.

In the above example, each contact person may have more than one phone numbers. In order to ease the retrieval of a collection of phone objects, Visual Paradigm converts the phone attribute into a ContactEntry_Phone array table.